This week I did something pretty damned scary.

I went skydiving and it was fantastic! What a freaking RUSH!

Okay. No I didn’t. That’s not me. It’s Sian Stokes, a total stranger featured in an article about insurance.

You extreme sports folks who just got sucked in by that photo should just tune out now, because you’ll find me rather dull when you read my version of pretty damned scary.

For those of you who are still with me, my adrenaline-filled moment involved a microphone, headset and a big red button that said “on the air.” 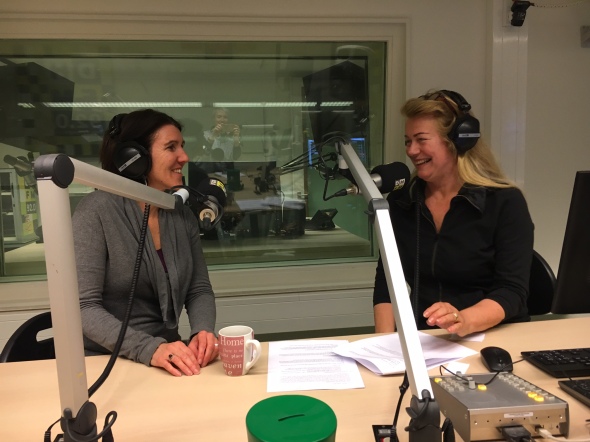 It all went down at the studio of Den Haag FM 92.0 for a program called Dutchbuzz. This weekly radio show in The Hague is designed to inform internationals about news and events taking place in their city. I’ve listened to the show enough times to know that it has a friendly, yet professional style. It’s informative, fast-paced and they seem to have a bent for arts, culture and environmental issues. They have a broad audience and the show is in English. In other words, it’s just my cup of tea.

So when Lilly-Anne Stroobach, the founder of Dutchbuzz invited me to the studio for an interview about my second novel The Things We Said in Venice, naturally I jumped at the chance.  But, there’s a but. I can talk for hours about topics I love, but put a microphone in front of me and I kind of choke up. Can you relate to that fear? There are no take-twos, no revisions. As a writer, I’m all about revisions.

But what the hell. Sometimes–actually a lot of the time–we have to step out of our comfort zone and just go for it. As the producer did a silent countdown on her fingers as a commercial came to an end, we were suddenly on. I stared that microphone down and took a few centering breaths as Lilly-Anne introduced me as a Hague author. She had read my novel in the course of a few days, and as she began to talk about it, it was clear she found it worth the read.

When she compared The Things We Said in Venice to Eat, Pray, Love, I couldn’t help but say thank you. I like good company.

When she recommended it to all of the radio listeners and announced she planned to recommend it to her book club as well, I felt my shoulders relaxing.  As I began to answer her questions, ponder aloud my motives for placing certain elements in the book, share why I chose characters in their thirties and early forties rather than teenage vampires, I realized I had stopped dissecting my fear and had stepped into the role of author talking about her writing process.  I had jumped out of that plane of safety and into the “on the air” and it was actually kind of fun.

Want to hear the interview? Then click here. It’s only a few minutes long and starts just before minute 17 in this podcast.

If you live in The Hague or surrounding area, I recommend listening to the whole show. You can learn about up and coming events–including a beer festival this weekend and a locally grown farmer’s market called Lekker Nassau. You can tune in to Dutchbuzz every Tuesday evening at 10:00pm to hear the live show at Den Haag FM 92.0, or catch the podcast Wednesday afternoon.

Thanks for letting me share this story about conquering fear, if only for a few minutes on the air. Considering I survived this, I might just do something even more daring.

After all, live radio interviews are the gateway drug to dolphin riding.